(07/26/19) Melissa Melser, who drives Anoka-Hennepin students to and from school and activities for First Student in Anoka, recently competed in the 49th Annual School Bus Driver 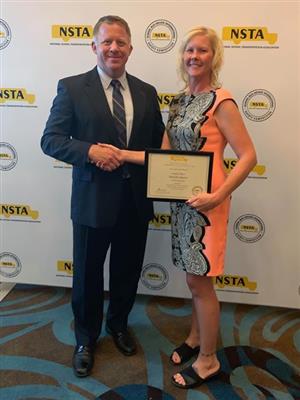 The competition was held in Austin, Texas, on July 21 and is administered by the National School Transportation Association (NSTA). It began in 1971 as the National School Bus Safety Road-e-o, and is one of the most important events in the industry where the best drivers from the United States and Canada compete for top honors and recognition.

Contestants take a written test before getting behind the wheel of a bus to put their driving skills to test competing in one of three categories: conventional, transit, or small bus. Drivers have the opportunity to demonstrate their professionalism, skill, and dedication to pupil transportation.

Melser has been driving a bus for almost nine years, and is in her second year competing in the international safety competition. She qualified for the international competition after placing first in her division and overall points at the Minnesota School Bus Road-e-o. Melser finished in fourth place out of 12 drivers in the small bus category. According to Melser, the best part of being a professional school bus driver is getting to help her students start their day on the best foot possible by getting them safely to school with a positive attitude.