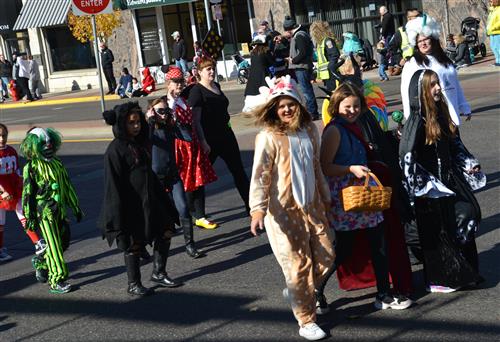 (10/31/19) What would bring together Harry Potter, an angel, a pirate, Beetlejuice, Mary Todd and Abraham Lincoln, a bunch of Crayola crayons, and some middle school marching bands? Anoka Halloween’s annual Big Parade for Little People, of course.

Anoka is known as the “Halloween Capital of the World,” and on the afternoon of Oct. 25, students and staff from Franklin, Lincoln and Wilson elementary schools in Anoka walked down the city’s Main Street, showing off their Halloween costumes and waving to the crowd of community members and parents who showed up to cheer them on. See photos from the parade event.

In addition, the marching bands from Anoka Middle School for the Arts, as well as Jackson, Oak View and Roosevelt middle schools participated, playing music along the parade route. Anoka-Hennepin School Board members and administrators also walked in the parade dressed as Crayola crayons.

Anoka’s Halloween history dates back to 1920, with the city being one of the first ever to host a Halloween parade. The city was officially proclaimed the Halloween Capital of the World by Congress in 1937, and the U.S. Post Office even held a Halloween stamp unveiling in the city in 2016.