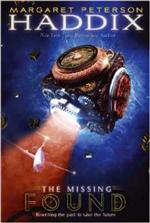 One night a plane appeared out of nowhere, the only passengers aboard: thirty-six babies. As soon as they were taken off the plane, it vanished. Now, thirteen years later, two of those children are receiving sinister messages, and they begin to investigate their past. Their quest to discover where they really came from leads them to a conspiracy that reaches from the far past to the distant future—and will take them hurtling through time. In this exciting new series, bestselling author Margaret Peterson Haddix brings an element of suspense that will keep readers on the edge of their seats.