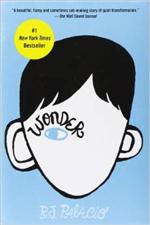 by R. J. Palacio Year Published:
I won't describe what I look like. Whatever you're thinking, it's probably worse. August Pullman was born with a facial difference that, up until now, has prevented him from going to a mainstream school. Starting 5th grade at Beecher Prep, he wants nothing more than to be treated as an ordinary kid—but his new classmates can’t get past Auggie’s extraordinary face.
Copyright © 2002-2020 Blackboard, Inc. All rights reserved.