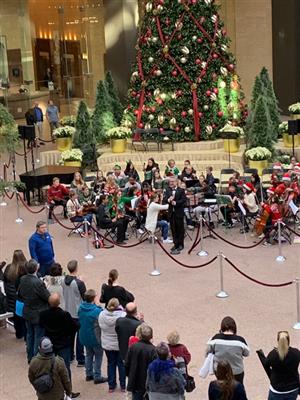 The heart of downtown Minneapolis was filled with the sounds from select students representing the Anoka Middle School for the Arts (AMSA) band, choir and orchestra on Friday, Dec. 6. Students performed as part of the Holidays Under Glass noontime concert series in the IDS Center Crystal Court. The 22-day series features a variety of community performers and AMSA, was one of only ten schools selected from around the metro area to perform. The students were led by AMSA music teachers Sabrina Olson, Jesse Peterson and Terrell Beaudry.

View photos from the concert.