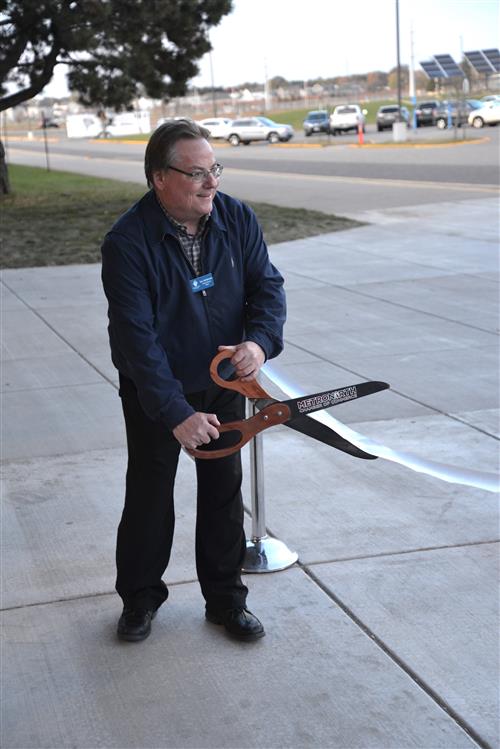 (10/30/19) Anoka High School (AHS) hosted a ceremonial ribbon-cutting event Oct. 29 to mark the unofficial completion to the first phase of Fit for the Future facility improvements at the school.

Anoka-Hennepin School Board chair Tom Heidemann, who represents Anoka and portions of Ramsey, Coon Rapids and Andover, had the honor of cutting the ribbon during the event, which was attended by about two-dozen members of the community, elected officials from around the area, as well as school staff, district leaders, and other guests. See photos from the event, and check out what makes the school a special place by watching the AHS profile video.

Also during the event, Heidemann joined Superintendent David Law in thanking the community for supporting Anoka-Hennepin by investing in the district and its schools through the 2017 Fit for the Future referendum approval, which made construction and improvements at AHS possible.

Following the ribbon-cutting, those in attendance took a small tour of the work done at the school, led by AHS Principal Michael Farley. Phase one construction included a new main entry and administrative office area, which was designed to increase safety and security at the school. In addition, a large classroom addition is nearly finished, which allowed the school to remove the portable classrooms. Phase two work has also already begun, which will expand the school’s fieldhouse and cafeteria. Those projects will be completed for the start of the 2020-21 school year.

More information about all of Anoka-Hennepin’s Fit for the Future projects is available at ahschools.us/FitForTheFuture.